Darin G. Billerbeck, President and Chief Executive Officer, said, "Revenue in the second quarter 2015 was the highest for the Company in almost 15 years. While this was below our expectations for the quarter, we remain on track to achieve double-digit revenue growth for the full year 2015, consistent with the double digit growth rate we have delivered since diversifying into the consumer market a few years ago. Q2 was an anomaly as we were hit with a series of macro-related customer issues, which are not a reflection of our ongoing business or the many high potential growth opportunities we already have in place. While we expect headwinds in Q3 from lingering macro weakness worldwide, we are executing against a robust sales pipeline and remain focused on winning increased share in each of our end markets. Importantly, we continue to control the many variables under our power as we leverage our scale to drive non-GAAP operating income to our 20% target."

Joe Bedewi, Corporate Vice President and Chief Financial Officer, added, "We achieved our gross margin target as efficiencies in our cost structure more than offset pressure on our revenue. Total operating expenses were $63.2 million on a non-GAAP basis for the second quarter, which compares to our guidance of approximately $65.2 million plus or minus 2% on a non-GAAP basis. The sequential increase compared to Q1 was primarily due to the full quarter inclusion of our acquisition of Silicon Image. Restructuring and acquisition related charges, including amortization of acquired intangible assets, were $4.1 million and $12.2 million, respectively, for the second quarter. We have already achieved $33 million in synergies and are on track to meet our current synergies goal of $42 million. We are also adjusting our current and 2016 operating expense model to reflect the expected lower near-term revenue. These actions are consistent with our focus on driving free cash flow and actively reducing debt."

Investor Conference Call / Webcast Details:
Lattice Semiconductor will review the Company's financial results for the second quarter of 2015 and business outlook for the third quarter and full year 2015 on Thursday, July 30, 2015 at 5:00 p.m. Eastern Time. The conference call-in number is 1-888-286-6281 or 1-706-643-3761 with conference identification number 86389650. A live webcast of the conference call will also be available on Lattice's website at www.latticesemi.com. The Company's financial guidance will be limited to the comments on its public quarterly earnings call and the public business outlook statements contained in this press release.

A replay of the call will be available approximately 2 hours after the conclusion of the live call through 11:59 p.m. Eastern Time on August 13, 2015, by telephone at 1-404-537-3406. To access the replay, use conference identification number 86389650. A webcast replay will also be available on the investor relations section of www.latticesemi.com.

Forward-Looking Statements Notice:
The foregoing paragraphs contain forward-looking statements that involve estimates, assumptions, risks and uncertainties. Such forward-looking statements include statements relating to: our expectation that we remain on track to achieve double-digit revenue growth for the full year 2015; that we will be able to leverage our scale to drive non-GAAP operating income to our 20% target; and those statements under the heading “Business Outlook - Third Quarter and Full Year 2015” relating to expected revenue, gross margin, total operating expenses, synergies and acquisition charges, including amortization of acquired intangible assets. Other forward-looking statements may be indicated by words such as “will,” “could,” “should,” “would,” “expect,” “plan,” “anticipate,” “intend,” “forecast,” “believe,” “estimate,” “predict,” “propose,” “potential,” “continue” or the negative of these terms or other comparable terminology. Lattice believes the factors identified below could cause actual results to differ materially from the forward-looking statements.

Lattice was founded in 1983 and is headquartered in Portland, Oregon. The Company acquired Silicon Image in March 2015, which is a leader in setting industry standards including the highly successful HDMI®, DVI™, MHL® and WirelessHD® standards. 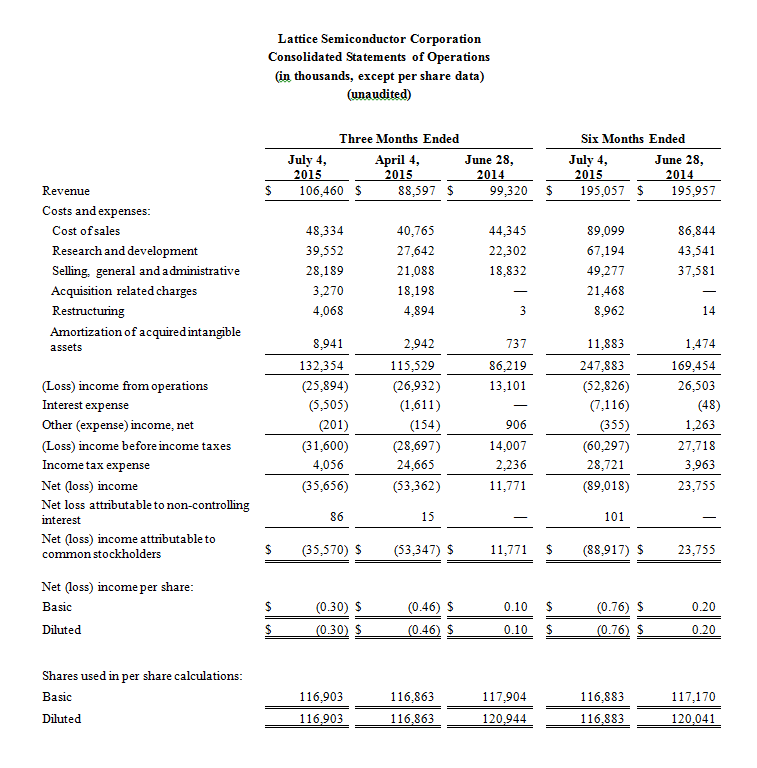 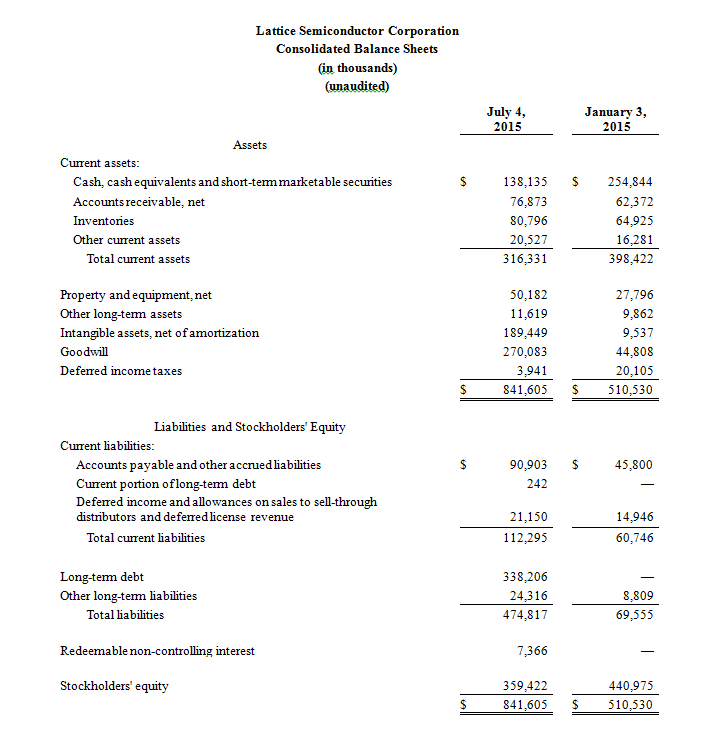 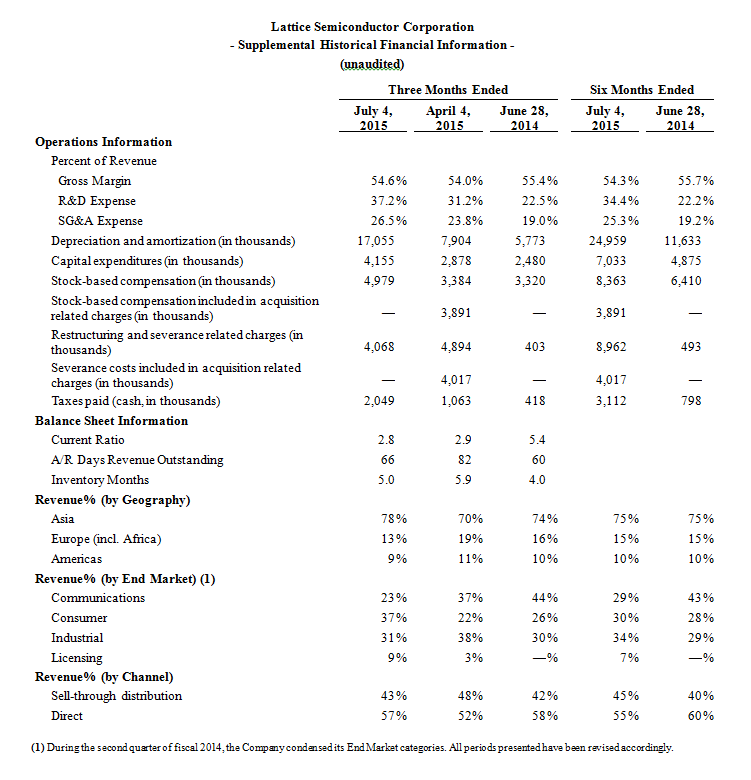 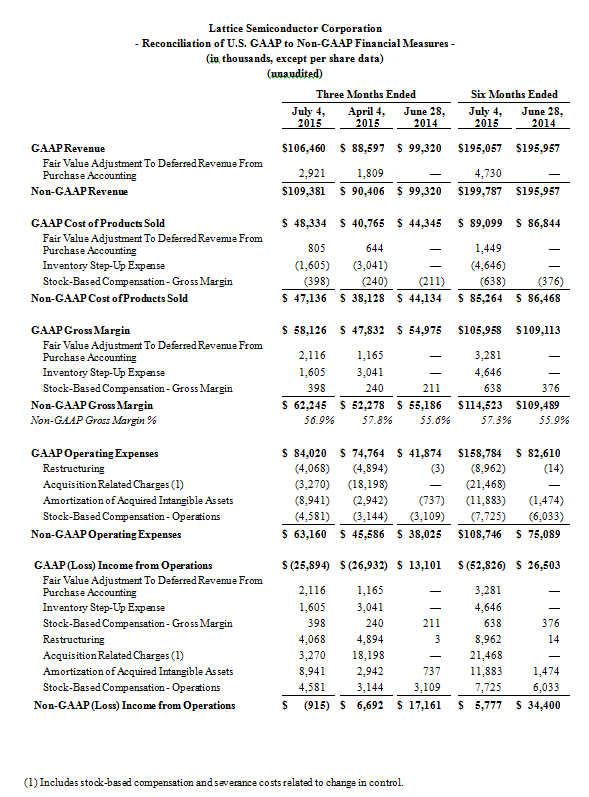 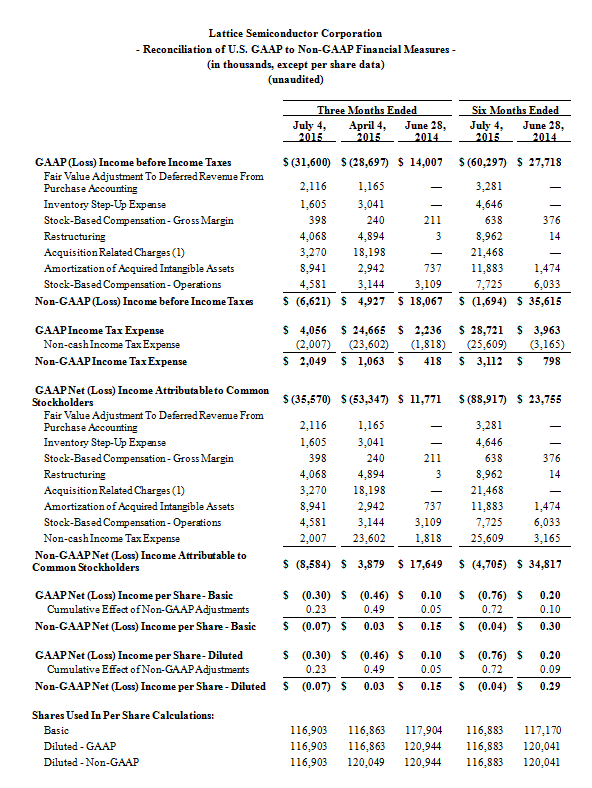